Cold. Grey. Very soggy. Yep, that pretty much describes our ride out of Melbourne today.

We were really looking forward to riding the coastline out from the city. Melbourne has around 900km of bike tracks and we were able to follow the ocean in our own wee bike lane for the first 35km. However, we woke to hear rain pounding on the roof and it was all I could do to delay…playing on my Garmin maps (still unsuccessful), two coffees, last minute internet. The downpour continued. We were going to get wet.

Just after setting off we had a short boat ride. It was like Winter back home as we crossed the water. Rain poured and the wind was sharp. I was actually jealous of the cyclist on the ferry heading to nice warm office. 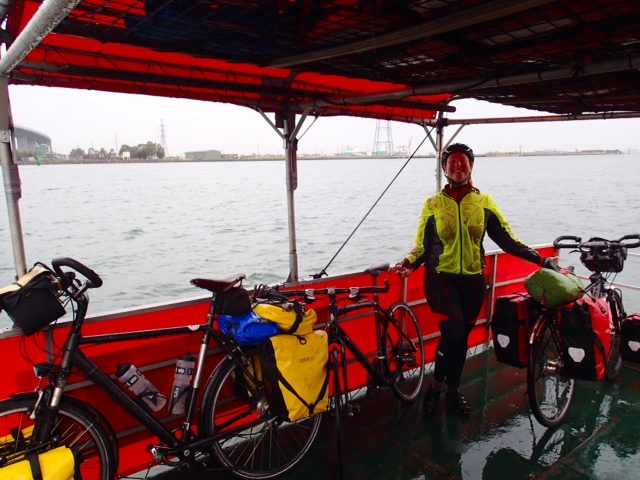 It’s not the first time however that the weather has not quite been as expected. Despite considering weather charts it seems misconception, naivety, stereotypes and holiday brochure marketing all override my research. Add to this changing weather patterns that seem to be occurring with increased frequency and it’s no wonder we’re taken by surprise.

Africa and Australia it seems are not always hot. Japan still holds the record for sticky, muggy and humid and New Zealand wins for wind. At least when riding in Scotland I really do expect to see all four seasons in one day.Sometimes of course a change can also work to ones advantage. On this trip we’ve seen double rainbows at Uluru and waterfalls as we left Milford Sound. If only we’d seen a change today. Unfortunately the only difference we found was between lighter drizzle or drenching torrents. Oh well…..room please.

The weather is often one of the common stats I choose to record. We Brits are, afterall known for our obsession with meteorology and in continuing the stereotype…..our love of tea. It seems, regardless of whether it’s sunshine or rain I do still love a cuppa. Here’s hoping for a dry day tomorrow.

When asked what I miss about home, aside from friends and family, my usual response has been to reply real ale and salt and vinegar crisps. For this trip however the answer has changed. While the range of real ale, or craft beer as it is known here, is not as broad as the choice back home, salt and vinegar crisps are everywhere. In fact, this has been the case in both New Zealand and Australia. What has been missing however has, for me, been much more significant.

As we travelled through New Zealand and are continuing through Australia we read up and try to discover what the various towns we pass through have to offer. Many of the towns seem very similar – at least in architectural terms – with decorated concrete facades, an occasional clock tower and fairly low rise. Of course, there are exceptions, usually in the bigger cities.

The fact that these countries were late for habitation means buildings, key dates and local information all generally fall around 1860 – ten years after my flat was built in my home town of Edinburgh. Asked what I miss of home….the reply was history. It’s amazing just how much we can take this for granted.

While as someone interested in self build and who enjoys admiring modern design, I miss the mix of housing styles. I miss temples, old churches and cathedrals, palaces, forts and other buildings that give each town it’s own identity. I also miss the multi-culturalism of the UK.

I have to confess we didn’t do much of the Mauri activity on offer in New Zealand and to date have been only to Uluru, Ayers Rock, to consider the Aboriginal influence of Australia but this last trip blew me away.

During our bus ride out to Kings Canyon (no…we didn’t bring the bikes to Australia’s red centre) we were shown a video outlining prehistoric wildlife and landscapes here. It was amazing to watch. In Uluru, we learnt much more of the Anangu people with a walk around the base of the rock by Cassidy Uluru. His family led on negotiations for title deeds for this land to be handed back to the traditional landowners. Despite this history going back for around 50, 000 years the national park at Uluru was only handed back in 1985.

While, much like in parts of Africa, this is not history that has affected skylines and build but this oral tradition is very much that thing which sets a country apart. For me, what makes Australia so distinct is seeing how what we would call primitive living exists alongside a much more advanced Western culture. The relationship between these two can certainly be tense. The desire to develop while maintaining tradition – the frustration of supporting something which is hesitant to change. There are no easy answers and we see similar discussion both at home and throughout the rest of the world.

I will still miss the architecture but the history is most definitely here. Perhaps the key thing missing is it’s integration?

So, it’s set and confirmed. On June 9th I will be doing my first public speaking event about my world cycle.

The event, to be held in Edinburgh on Monday 9th June, will be a fundraiser for my chosen charity, The Homeless World Cup.

It will be held at The Melting Pot, 5 Rose Street and for just £10, including a small glass of wine and snacks you can hear tales of Japanese love hotels, cycling the Annapurna circuit in Nepal, riding from Cairo to Capetown and various other stories from this 30, 000km adventure.

I would love it if you could join me for the evening in this chance to meet old and new friends, learn more about world cycling, and you may even win a prize in our raffle.

The event will begin at 6.30pm (till 8.30) so you can come straight from work or use as an excuse for some travel of your own as part of a long weekend.

To book your place please use this link. You can also find this through the events tab on the bikemind website.

If you love travel, cycling and want to hear more about living out a dream with complete stranger then do come along.
Look forward to seeing you on June 9th.

We”re currently staying in a backpackers in Katoomba. While we both perhaps feel a wee bit old and not so into the socialising aspect of backpacker travel, overall, the place is okay. Clean, friendly and reasonably functional. I’m pleased. After our last experience in Newcastle we vowed it would be our last….but we had already booked this one before deciding our preference was for camping with the grey nomads.

We had been looking forward to our day off in Newcastle. Things to see, time to relax and proper beds. With access to cooking and laundry facilities this often makes the backpackers a reasonable option here given cabins at campsites in Australia are much more expensive. We arrived around 12pm and it was not too bad…the two young girls on reception were very helpful, the room was fine, the pool area seemed pleasant and we could even take our bikes indoors. Posters clearly displayed “no drinking after 9pm” and one of the other guests actually spoke to us….something we have found rarely among the much younger brigade.

There was another chap at reception checking in a small group of guys and this I believe was the root of the trouble that followed. The pool area became busy, the music volume kept increasing, empty beer crate was soon filling and the ashtrays overflowed. By late afternoon the lounge area was full as people drank, slept  and generally did nothing. We went out.

On arriving back from dinner – a reasonable curry house close by -  we made a hasty retreat to our room. While fine at first even I couldn’t sleep through the 3.30am party and the 6am noise as folk finally trundeled or were dragged across the hallway to bed. So much for a good nights sleep.

We woke the following morning to find a young guy sleeping on the sofa in the hallway, an overwhelming stench of booze, food all over the floor in the kitchen and washing up filling the sink. So much for the kitchen facilities. Despite this we made toast and coffee and sat down at the sticky table. I needed to get away from the site of ketchup on toast…does no-one learn how to cook anymore? Even I was finding this disgusting.

I felt sorry for the two young girls clearing up after everyone else though I’m afraid I finally couldn’t hold back my feelings on our stay as I found out our food had also been taken from the fridge. We couldn’t wait to go out for the day. Unfortunately, by now the young guy on the sofa had slid out from his duvet and was now splayed out, with all on show. Not a pleasant site. We stayed out all day, dreading our return. At least there was some solace in our wee room.

Despite complaints there was little that could be done. It seems this is not unusual at backpacker hostels in cities at the weekend. What will now be very unusual is finding me in one at that time.

….as for the nosepicking. This was the poster in the toilets… 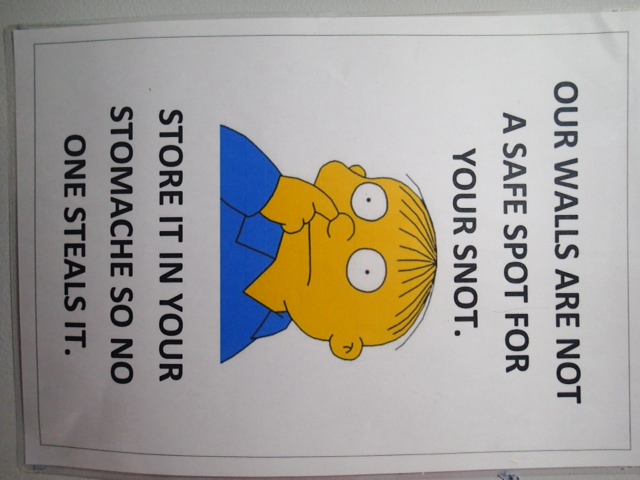